A 100% biodegradable product, Tack Attack Adhesive Remover has a pleasant citrus fragrance. That’s because it’s derived from materials and chemicals sourced from natural materials and plants, fruit and seed-based chemicals and derivatives of them.

Yes! Tack Attack is a sticky adhesive remover, but did you know:

• Help Removing Rings
It’s true—sometimes you just need to remove your rings to do some work. It can be a problem if they’re tight on fingers or your hands are a bit swollen. Don’t fuss! Just spray a little bit of Tack Attack between the ring and your finger and gently wiggle the ring to slip it right off. But wash your hands and jewelry afterwards so the rings don’t accidentally slip off next time you wear them.

• Drinking Glasses Stuck Together?
Ever have this happen? You’ve stacked a couple of drinking glasses one over the other and you just can’t get them apart? A vacuum has formed and try as you might, they’re stuck together! Tack Attack to the rescue—just spray some Tack Attack so it can run in between them and they’ll come loose! Give them a good wash before you drink from them.

• Sometimes LEGO Pieces Get Stuck
It happens all the time, you just can’t get some pieces apart! Here’s the solution—spray the stuck pieces with some Tack Attack, let it soak in, and those pieces will come apart with ease.

• Gum in Hair? Here’s the Solution:
It’s a horror story! Somehow your little one has managed to get chewing gum in his/her hair! Put away the scissors—just lead the child outside, cover her eyes and very carefully spray some Tack Attack on the gummy stuff in her hair. Tack Attack will dissolve the gum allowing you to comb it out. Now just a quick shampoo and it’s back to having fun!

• Little Leonardo Created a Crayon Masterpiece
Young artists often find walls and tabletops make good canvasses for crayon works of art. Hand them a colouring book and get out the Tack Attack. Just spray some on a soft cloth and easily wipe the crayon away. Your walls will thank you.

• Refrigerator Cleaning Made Easier
It’s not a lot of fun but every once in a while the fridge needs a good clean inside and out. Go ahead, empty it out and spray on the Tack Attack. Wipe all surfaces and see how Tack Attack melts away those spots and spills. Does a terrific job cleaning the outside stainless too—just spray on and polish!

• Degrease Your Hands
Tack Attack can clean grimy, greasy hands. After doing dirty work like fixing autos, motorcycles and machinery, just spray on Tack Attack and wipe with a rag. You’ll be surprised how quickly and easily Tack Attack cleans away the grime. Works for sticky glue and some paints too!

• Fix Some Paint Damage
We’re talking parking lot damage. Your car has been gently ‘kissed’ by another and while there’s no dent, there is some scuffed paint from the other vehicle left on your car’s shiny surface. No worries, a little Tack Attack on a soft rag can wipe the offending paint away! Easy Peasy.

• Cleaned the BBQ Lately?
Then use Tack Attack! Spray the barbecue—and the accessories—let it all soak for about 30 minutes and then wipe all the greasy gunk away with a steel bristled brush or scouring pad. We didn’t say this will be an easy job, but your BBQ will be beautiful again and ready for you to throw on a big steak!

• Here’s a Way to Remove Stains
Spray Tack Attack on a carpet or fabric stain, leave it in for about 2 minutes, then use a carpet cleaner or rinse the stain with warm, soapy, water and a sponge. For clothing, just spray some Tack Attack on the stain, allowing it to soak in, and then put the clothing in the washing machine. Tack Attack also works well on lipstick, tomato, grease, and ink stains.

• Clean Your Toilet with Tack Attack
Yes, Tack Attack can even clean a toilet! Just pour some in, brush the surfaces with a regular toilet brush, and flush, and your toilet is good to go (in).

• Clean Water Stains on Stainless Steel
Hard water can leave stains on stainless steel surfaces like appliances, sinks and shower heads. Use Tack Attack to polish them away—just spray and let stand for about three minutes then polish with a soft cloth. Tack Attack cuts through the lime and dissolves it so you can just wipe it away!

• Stuck Zippers are a Pain!
But spray a little Tack Attack on the zipper and a stuck zipper gets unstuck! Just gently spray and then zip up and down a few times to distribute the Tack Attack. The zipper will run smoothly.

• Remove Sticky Glue Residue
Well of course Tack Attack removes sticky glue, that’s why we invented it, but did you know that it will also clean sticky glue and spray paint from your hands? Just spray some Tack Attack on a soft rag and rub. Afterward, rinse your hands with soap and water. Tack Attack won’t harm the skin.

• Cleaning Tiles
Mould, limescale, and other dirty buildups can occur in corners and out-of-the-way places on bathroom tile floors. Put away the scrub brush and spray some Tack Attack on the problem area, let it soak, and wipe off with a clean cloth or sponge. Wipe dry and see how clean and bright your tiles look!

• Banish Those Scary Spiders
They’re always around—in the corners; in the basement; in the garage—those creepy eight-legged pests. Here’s how to scare them away—just spray Tack Attack on the surfaces where they hang out, or into the spaces where they like to congregate. Bye-bye spider pests!

• Get the Bugs Out
Summertime! That’s when the front of your car can get all stuck up—your bumper and grille are a mess with sticky, dried bugs and the hot road tar splashes and sticks to the paintwork. Relax, Tack Attack will remove it all—just spray it on the surface and let stand for a few minutes, then wipe the grunge away. And when everything is clean again, spray on a little more Tack Attack to make it easier to clean next time!

• Of Course We Remove Stickers!
That’s what Tack Attack was originally designed for—removing those really hard to eliminate price stickers and labels from all kinds of hard surfaces. Just spray on Tack Attack, let it soak in for a few minutes, then easily peel or scrape off the sticker.

• Remove Scuff Marks on Floors
Black scuffs on tile floors are history, just spray on Tack Attack and rub them out! Hockey players even use it to remove puck scuffs from rink walls and equipment.

• Chrome Car Parts Can Look Like New
If the chrome trim on your car is looking dull, clean it up with a light abrasive then polish with Tack Attack. Not only will these parts look new and shiny, but they’ll also be protected from further corrosion if you leave a light film of Tack Attack to protect them.

• A Deterrent for Wasp Nests
Wasps like to build their nests under the protected overhang of your eavestroughs. To help deter this from happening, spray these areas with Tack Attack. Wasps will not be able to build on these surfaces even if they try!

• Prevent Your Car Locks from Freezing
When you see freezing weather on the way, spray some Tack Attack into the key locks on your car or truck. Tack Attack will displace any water in there and keep water out so freezing cannot occur.

• How to Kill Weeds
Got some persistent weeds in your garden? Of course, you do! Just spray them with Tack Attack. After they wither, pull them out, root and all.

• Candle Soot Cleanup
Tack Attack easily cleans away black candle soot left on candle holders or sconces. Just spray on Tack Attack and wipe the soot away. And what’s more, Tack Attack will any remove candle wax that has dripped on surfaces—just spray it on, let it soak, then wipe.

• Paint Job Help
When painting around door hardware first wipe on some Tack Attack to coat the metal surfaces. Any paint droplets can be easily wiped away. Tack Attack can also help to refurbish dried paintbrushes and loosen stuck paint can lids. Try it!

• Shine Your Artificial Plants
If your artificial plants have become dull and dusty, spray some Tack Attack on the leaves and wipe them with a soft, clean cloth. Tack Attack will not damage your plants and they’ll look fresh again!

• Rust Check Your Shower Heads
Just spray Tack Attack on your shower heads a few times a year when you clean and they’ll be protected from corrosion and rust.

• You Can Easily Remove Tea Stains
Ever leave a teabag in the sink and forget about it? Odds are, when you remove it there will be a brown tea stain to deal with. No problem, just spray on some Tack Attack, let sit, then wipe the stain away! Works on countertops and other hard surfaces too. And did we mention hair dye stains on towels? Don’t throw them away, spray Tack Attack on the stains and toss them in the washer to remove the stain!

• Restore Your Plastic Garden Furniture
Are your plastic garden chairs and tables looking dingy and dull? Just spray on Tack Attack and give them a good wipe. They’ll look like new again!

It will even remove wax! Read what this Tack Attack user says:

“The other night I was heating up my facial wax in the microwave and the bottom of the plastic jar split open. Wax exploded all over the bottom and sides of the microwave. It was a mess!

I was able to scrape off most of the wax on the turntable. That left the worst of it on the sides of the microwave and the door so I Googled how to get it off. I tried vegetable oil; just scraping it off; rubbing with a dryer sheet; and using a scratchy pad, but nothing worked. I tried to steam it clean with water and vinegar, but that exploded too and ended up with water and vinegar running out of the microwave onto my new stove!

I cleaned up that mess and waited for my husband to see if he had any other suggestions. He suggested Tack Attack so I sprayed some on a test area, let it sit for a few minutes, and it worked!

It was almost 10pm by then, so I left the rest of the clean-up ’til next day. The worst spots took two applications of Tack Attack, but it was a way easier clean-up than I thought it would be! Thank you, Brian!” 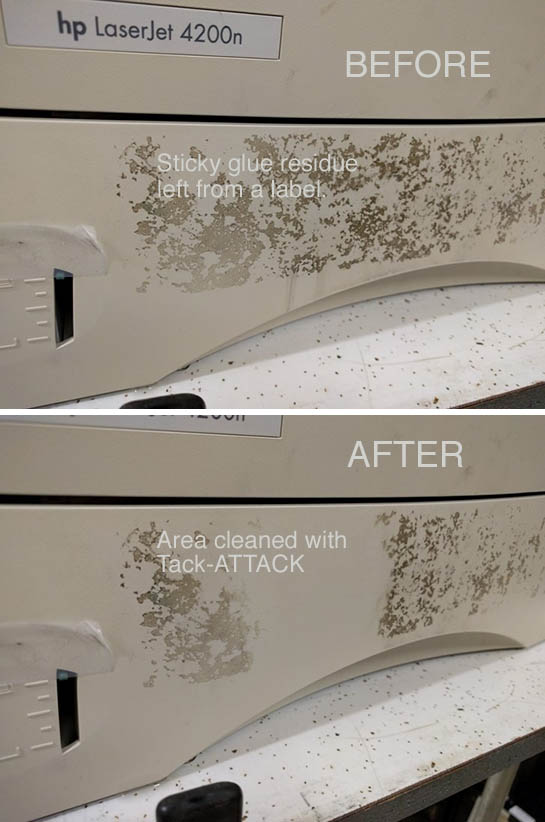 The above photos show how Tack Attack effectively removed sticker residue from this office printer. Click to enlarge.

< Back to Home Page